Food and Restaurants in Zermatt

Far away from the nearest town and idyllically situated between breathtaking mountain scenery is the village of Zermatt. With just 5400 inhabitants it makes an almost sleepy impression – but the appearance is deceptive. With 2.2 million overnight stays per year, it is one of the top tourist destinations in Switzerland. The Matterhorn, seemingly endless ski slopes, spectacular hiking trails and a unique atmosphere certainly contribute to this, but the restaurants in Zermatt also have a lot to offer.

Traditional Zermatt mountain cuisine has developed over the centuries and has been passed down from generation to generation. The need from earlier times to preserve food through the harsh winters has created the basis for many of today’s dishes. Zermatt’s restaurateurs are proud of the local, honest cuisine with homemade specialities and delight tourists from all over the world with their menu. From home-made Swiss cuisine with local specialities to international delicacies to Italian cuisine with homemade pasta and vegetarian restaurants – in Zermatt everyone will get their money’s worth – promised!

In Zermatt you are not only very close to the stars when you venture to one of the many high peaks on a mountain expedition. Less adventurous guests can also enjoy two Michelin-starred restaurants that are among the best in the world. At the elegant restaurants After Seven (1*) and Alpine Gourmet Prato Borni (1*), the menus on the menus are a perfect mix of exclusivity and homeland love. The creative dishes are a trendy pleasure experience, taking the dining to a new level. The restaurants are a must for those who want to end their stay with an unforgettable experience.

Culinary highlights with a view

If you want to taste regional specialities in a special ambience, the mountain restaurants Findlerhof and Chez Vrony (awarded with 14 Gault Millau points) are just the right place. Here you get a delicious insight into the traditional cuisine and can taste varied and freshly prepared dishes in a family atmosphere. There is also an unobstructed view of the mountains and, if you are lucky, a sunset that you will never forget. For those who want alpine enjoyment with an unobstructed view of the “most beautiful mountain in Switzerland”, just the right thing

Driven meat is produced according to old tradition and with great care by a few farmers from the region. It is an integral part of Alpine cuisine and is one of the Swiss specialities in the region.
In the summer months the cows graze on the pastures. They eat many fresh mountain herbs and breathe in the clear mountain air. They spend the winter in the stables and are fed with hay from the regional pastures.
In early autumn, a small number of cows are slaughtered and the meat is dried in the attic or storage room during the winter months. This type of preservation has been practiced by farming families for generations and gives the meat its outstanding flavour. The dried meat also bears the coveted designation of origin IGP (abbreviation for: protected geographical indication), which is used to designate traditional and typical specialities of a region.

The regional lamb meat is also of excellent quality. The black-nosed sheep graze on the alpine meadows and eat tasty wild herbs that give the meat its unique flavour. Due to its rarity, it is highly sought after and only available in selected restaurants in Zermatt. A real delicacy!

The region is full of culinary highlights that you simply have to try. Whether in the restaurant or in the kitchen of your own chalet in Zermatt – those who are only on a short stay are spoilt for choice.

According to the vernacular, cow herders, who drove their cows to the summer pastures, took cheese as food, which they melted over the campfire in the evening. The result was raclette – a melted cheese that is now eaten with various side dishes.
Raclette du Valais AOP (French Appellation d’Origine Protegée) is a special cheese produced and processed on a single mountain pasture in Valais. Its unique creamy texture and incomparable taste are due to the cows, which give particularly aromatic milk and the maturation process of three to six months.

The semi-hard cheese can be heated either in the traditional way over an open fire or on a table grill. There are also small pans (French Coupelles) in which the cheese is put to heat and, as soon as it has melted, scraped out with a wooden spatula. Raclette is served with Valais dried meat, Valais raw ham, pickles, silver onions and “Gschwellti” (boiled peeled potatoes).
The raclette tastes best when you enjoy it with friends and local wines. It is one of many Swiss specialities that you simply have to try!

Same same, but different. Fondue has always been an important part of Swiss cuisine and was even chosen as a national dish by the Swiss Cheese Union in the 1930s. Although fondue is also melted cheese, it differs in taste and texture from raclette. For a fondue, the cheese, such as Gruyère or Emmentaler, is grated and cooked with other ingredients such as garlic cloves, wine or cherry brandy and spices directly in the caquelon (fondue pot). To keep the cheese liquid and hot, the caquelon is placed on a Réchaud (cooker) equipped with a candle or a spirit burner. With the fondue forks, which are longer and thinner than conventional eating forks, fresh bread cut into bite-sized pieces is dipped into the fondue. As with raclette, eating fondue in a sociable round is the most fun. But be careful: those who lose the bread in the fondue must give their table neighbors a kiss. Therefore, we advise against eating fondue with the ex-partner.

The Valais rye bread, also known as Pain de Seigle Valaisan, is also a local speciality that can be used as an accompaniment to dried meat, raclette du Valais or fondue.
Since the rye is grown in the Valais high alpine pastures and the bread is baked in the region, it bears the AOP (French Appellation d’Origine Protegée) seal of approval. The bread’s long shelf life dates back to the time when the Valais villages still had community baking ovens, which were fired only two or three times a year. Thus a bread had to be made that can be kept for several months. This resulted in another culinary delicacy, which is still an integral part of Valais cuisine today. Those who want variety on the plate can try the different variations with apricots or nuts from the region.

The Valais is the largest wine-growing region in Switzerland and is known for its particularly aromatic wines. The vineyards, which nestle against the slopes of the Rhône, thrive with plenty of sunshine and little rain. Historical irrigation channels, also known as Bisses, bring the clear water from mountain streams into the valleys and vineyards. The grapes can ripen under perfect conditions and develop their incomparable note. So it’s no wonder that the Valais prefer to drink their own wine.
The most popular white wine is the Fendant, which means “split. ” It owes its name to the property that the ripe berry bursts when you put a little pressure on it without the juice leaking. The wine is slightly foaming and goes well with a fondue.
If you want to enjoy a red wine for dinner, you can orient yourself to the favourites of the Valais: Pinot Noir, Syrah and Humagne Rouge. They go well with meat, cheese or can be enjoyed just like that.

What do a power station, the Gornergrat Bahn and culinary delights have in common? Not much at first glance, because the restaurant Die Turbina Zermatt is a real insider tip.
From 1898 to 1941, the turbine supplied the Gornergrat Railway with electricity, because the cottage housed a hydroelectric power station. In 1947, the railway was replaced by conventional electricity and the turbine was obsolete. The now dilapidated building almost fell into oblivion – until 2014. The brothers Jürg, Michael and Christian Meier bought a chalet nearby, got the old hydropower plant as a gift and had a great idea. They renovated the power plant and deliberately put the old machines in the center. They took 16 tons of material out of the building. Afterwards, it was cleaned, refurbished and provisionally equipped with candles, because electricity and running water were not available in the Zermatt turbine at the beginning. Meanwhile, the restaurant is fully equipped – not only with light and water, but also with a professional DJ system, a high-quality bar and kitchen and a projector. Gourmets from all over the world will get their money’s worth here, because the food is loving and refined at the same time and can be individually put together on request. 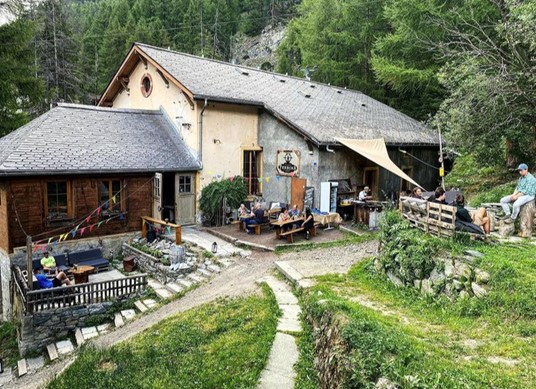 Beautiful and hidden away from the beaten paths. Turbina in Zermatt

The Turbina Zermatt is equipped for all events and guests can celebrate weddings, parties, seminars, product presentations or birthdays in a unique atmosphere – including excellent Valais cuisine. In summer outdoors on the terrace with a view of the Matterhorn, in winter in the atmospheric interiors between the remnants of another era. The Turbina is the only restaurant that is predestined for events and occasions that will be remembered by everyone.

Not only hungry? Checkout our complete Zermatt Guide for all the information you need!

If you have any questions regarding this article or our holiday rentals please contact us via +41 27 968 11 30 or email us  info@zermattholidays.com