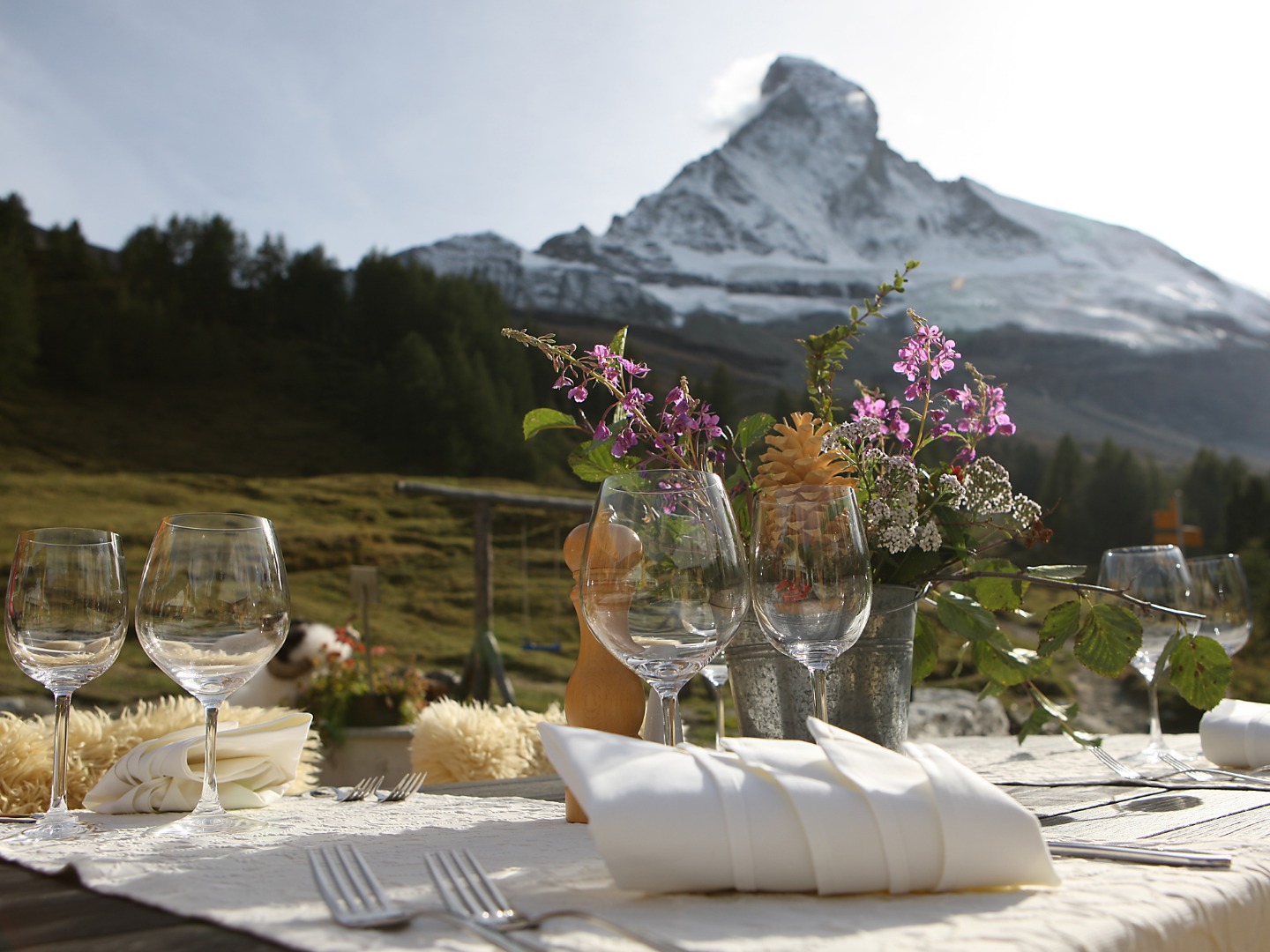 If you are visiting our beautiful Valais region you won’t be disappointed with our Zermatt Mountain Cuisine, it is something we are very proud of and is serviced in many of our traditional Zermatt restaurants.  Developed over the centuries and passed down through generations, much of our food has been developed from the need to preserve food over our harsh winters.

Home to no less than four Michelin stars, Zermatt Restaurants are up with the best in the world.  They are:

But you don’t have to eat at Michelin star restaurants to get great food in Zermatt.  The following mountain restaurants are some of our favourites for great regional specialities:

The cows and our black nose sheep breathe fresh mountain air and in the summer and are lucky enough to graze in alpine meadows.  They spend the winters in barns fed by plenty of hay which is produced over the summer months.  In the early autumn a small number of our cows are slaughtered and the meat is hung up in an attic or a storehouse to dry out.  This method of preserving allows the meat to last over the winter and has been used by generations of family farmers.  This Valais dried meat holds the sought after IGP designation of origin (Protected Geographic Indication) which means it has been made using meat from the area.  The Valais region is also famous for its Valais raw ham and Valais dry-cured bacon, which also hold the IGP status.

The lamb from our black-nosed sheep is also of excellent quality.  The sheep are grazed on the alpine meadows with their wild herbs.  This imparts a unique taste to the lamb which is extremely sought after and only available in the best Zermatt restaurants due to its scarcity.

If you are eating out in Zermatt, or even shopping for yourself, we have some wonderful regional foods and dishes which we really recommend you try during your stay!

Raclette is basically a portion of semi-card cows cheese which is heated until it starts to melt.  Once it reaches the correct consistency the melted cheese is scraped off and eaten either on bread or with other accompaniments.

The popular story is that the cow herders took the cheese with them to work, and melted it over their evening camp fires whilst they were moving their cows up to the summer pastures.  The tradition has been strong ever since!

The actual cheese or Raclette du Valais AOP (Appellation d’Origine Protegée) acquires its label as it has been both manufactured and processed in the Valais region, and a genuine Raclette du Valais can even be pinned down to a single Alp .  The cheese gets its unique creamy texture and fabulous taste from milk from the cows that have been grazed on alpine pastures and its aging process which takes three to six months.

The cheese can either be heated in the traditional method, in front of a roaring fire, or today many Zermatt Restaurants serve Raclette du Valais on a table top grill.  These come with little pans called ‘Coupelles’ which collect the cheese as it melts which can then be served with typical accoutrements such as Valais dried meats , Valais raw ham and various pickles.  A Raclette du Valais is a very social meal which is enjoyed slowly, with local wines, and friends.

Although it involves hot melted cheese a Fondue is quite different to a Raclette.  It involves heating Swizz cheese and other ingredients such as wine or sometimes Kirsch, garlic and other seasonings in a pot at the table.  Popular cheeses included Gruyere, Emmental.  You then eat the fondue by dipping bread into the hot melted cheese.   It is similar to a Raclette in that it is a social meal with groups of friends enjoying the interactive experience.  The Fondue was promoted in the 1930s by the Swiss Cheese Union as a national dish and has always been an important part of Swiss culture.

If you are looking for an accompaniment for your dried meats, a Racelette du Valais or for a Fondue then you can’t go wrong with a Pain de Seigle Valaisan.  This local rye bread also holds the AOP (Appellation d’Origine Protegée) mark of quality as the rye is grown on the high alpine pastures and the bread is baked in the local area. This type of loaf was developed to last for several months as traditionally the village ovens would only be fired up two or three times a year.   A Pain de Seigle Valaisan should be sliced thinly and you can also find loaves the include apricots and nuts from the local area.

Swiss wines are very popular and the Valais is the largest wine producing region in Switzerland.  The alpine sunshine provides a unique environment for the grapes to grow and the vineyards and some of the best in Europe. Swiss wines provide the perfect accompaniment to the local dishes above and are often served in Zermatt restaurants.

The most popular white variety is the Fendent which translates as ‘split’.  The grapes do actually split as they ripen producing a distinctive wine which is sometimes slightly sparkling.  It is also a perfect wine to use in a fondue.

The most popular red variety is the Pinot Noir although Syrah and Humagne Rouge are also available locally.

It is little wonder that the Swiss eat the most chocolate in the world as Swiss Chocolate is considered some of the best in the world. The high milk content gives it a creamy texture and there are many brands including Lindt, Toblerone, Milka, Nestle,  Läderach and Cailler.  Toblerone is especially loved in Zermatt because of the iconic Matterhorn on the packaging!

If you are planning on visiting Zermatt and the Valais region, we have a fantastic selection of bed & breakfast, self-catered or fully catered Zermatt Chalets and apartments available all year around.  Our Zermatt Holidays office is right in the centre of Zermatt so we are right there to help you with anything you should need.  Nothing is too much trouble for us and we look forward to hearing from you soon!